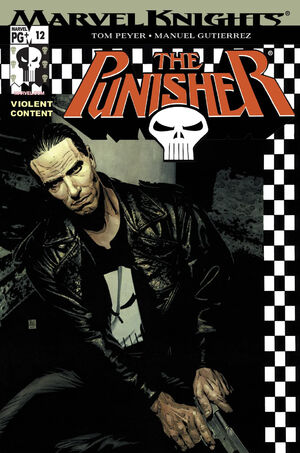 Still don't like this. Nesbitt buying these maggots off with his will. I hated someone like he hated them, I'd go ahead and waste them.

A naked Napper French, while standing above the tied up Maginty, instructs him on the proper way to set up a "Houdini", including getting the proper knives and applying plastic to the walls. As he begins to cut off the fingers on Maginty's left hand, a few of thugs enter, shooting French with a shotgun. After a seconds thought he decides to put his fingers on ice and go directly after Nesbitt's money.

Finn Cooley calms Brena Toner down when Maginty walks into the Pot O'Gold, saying he was expecting him. Maginty briefly reflects on Nesbitt calling him "Paddy the Monkey" when he was a child and throwing peanuts at him when Eamon and Polly enter the bar. Deciding none of the gangs need to fear Nesbitt from the grave, they put their codes together, coming up with a grid reference they check against a map. All four knowing the location, they begin to reach for their guns, causing Michael Morrison to smash a bottle on the bar and scream at the lot of them that they were so close to peace and being free of the past and they don't need to go backwards.

Outside, the Punisher, Yorkie Mitchell, and Andy Lorimer watch the gangs leave together peaceably. Mitchell decides there are too many civilians around to go after them now, meanwhile the Punisher thinks to himself that he still doesn't trust the sudden altruistic change is Nesbitt's personalty.

The gangs arrive at a derelict freighter, with the Punisher and the Brits on their tail. While the leaders explore the inside, Maginty's crew is put on watch and stealthily killed. The Punisher tosses a stun grenade into the ship among the gang leaders, but his attempt to join them is disrupted by Finn being able to cover his eyes in time and throw a standard grenade back. Finn and the Punisher fight in the shin deep water while the other gang leaders leave to try to locate the $10million.

Topside, Morrison attempts to give himself up to Mitchell, who shoots him in the chest.

Polly abandons her brother, shot during the confusion from the stun grenade. Mitchell drags the Punisher out of the ship while the gang leaders discover the lockbox. Opening it they find a timer set for three seconds connected to a brick of plastic explosive with "CUNTS" carved in to it. As the ship explodes, Lorimer pulls Mitchell and the Punisher onto his boat and pilots it away before the cops arrive.

The next day, Lorimer takes Peter Cooley out of a trunk and, holding a pistol on him, walks him into a small building. Cooley asks if he can pray, and Lorimer says he doesn't care. In the car, the Punisher says he doesn't need a ride home and, getting out, warns Mitchell not to come around any time soon. Lorimer comes back, hands the gun to Mitchell, and says he doesn't feel any different, and Mitchell asks him if he thinks Frank does after his thirty years.

Retrieved from "https://heykidscomics.fandom.com/wiki/Punisher_Vol_6_12?oldid=1450248"
Community content is available under CC-BY-SA unless otherwise noted.