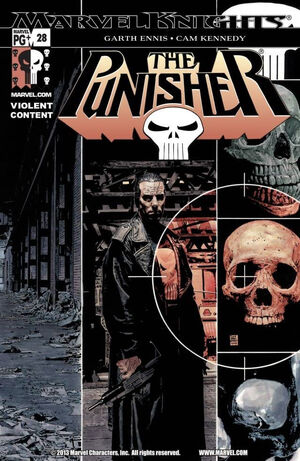 Prison held no terror for a man like him. Neither did torture nor did death. How would you make him afraid? How would you even talk to him? You'd start by showing him you speak the language.

Appearing in "The Slavers, Part 4"Edit

Synopsis for "The Slavers, Part 4"Edit

The Punisher attacks the slavers' lake house, by drugging the stew. He then has the girls picked up by Jennifer, and proceeds to torture and question Cristu by eviscerating him and looping his intestines around a tree.

Retrieved from "https://heykidscomics.fandom.com/wiki/Punisher_Vol_6_28?oldid=1450264"
Community content is available under CC-BY-SA unless otherwise noted.