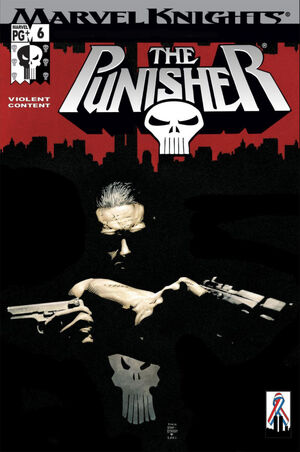 You have to be fucking kidding me. His next step's a reflex action. So's the next one. Got to be.

Appearing in "In the Beginning, Conclusion"Edit

Synopsis for "In the Beginning, Conclusion"Edit

The Punisher has taken position on the roof of Micro's warehouse to hold off the coming mafioso, with Micro inside. Despite already having had three cars shot up and their passengers killed, Nicky Cavella orders Larry Barucci to send in the next two. At the same time, Robert Bethell is flying near the scene in a helicopter and gives the order to have the local police establish and hold a perimeter.

Pitts exits the trunk of one of the shot-up cars, sneaks up on Micro, and stabs him through the stomach. When he doesn't answer his call, Punisher realizes something is wrong and begins firing downward through the roof. Pitts fires back, forcing him to back up until he falls through the skylight. The duo begin to fight, Pitts destroying one of Castle's ribs with a shotgun blast and Castle giving Pitts his all.

Bethell's helicopter passes over Cavella and Barucci--who are themselves planning to move in on the warehouse having hears Pitts' shotgun firing--and he orders the soldiers to fire. They refuse as they are not cleared to do so, so Bethell takes over the controls and begins firing wildly at the warehouse. An order comes through the soldiers headset--"green seven"--and they dump him from the flying helicopter, citing "Homeland Security."

Inside the warehouse, Pitts picks up a shard of glass. He rushes Castle, slicing his arm and face, until he puts his palm in it's path to allows the shard to go directly through it and break off the point. He scoops Pitts up and charges toward the window, throwing him from the third floor and on to a spear-top fence. A moment later, he leaps from the same window, landing on his chest, driving the fence deeper into Pitts' chest.

The Punisher goes back through the warehouse, bypassing Micro who is in need of medical attention, to shoot at mafia members at the entrance. Nicky puts a gun to Larry's head, ordering him to be a decoy for him to make an escape. Punisher shoots Larry, but Pitts appears behind him--with the fence sticking through him and half his face gone--as he's lining up a shot on Nicky. One final shot kills Pitts.

Nicky makes it one of the perimeter NYPD squad cars, immediately shooting one of the officers and forcing the other to drive him away from the area. As the Punisher walks past Bethell he offers him a job one more time, with he refuses again. Frank reenters the warehouse and speaks with Micro, who suggests another take on the Bob Garnett story. He suggests that the story is actually about him having lost control, which he normally doesn't do, and wonders if there was ever a chance he could have chosen not to become the Punisher. When he brings up that Castle hesitated, he writes it off as having not seen him in eight years and only Micro actually having a gun in his hand at the time. With that he shoots his former friend in the head.

Retrieved from "https://heykidscomics.fandom.com/wiki/Punisher_Vol_6_6?oldid=1450242"
Community content is available under CC-BY-SA unless otherwise noted.