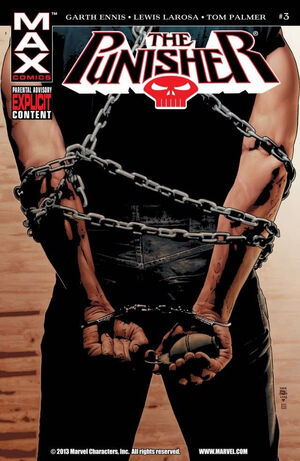 Frank Castle and the hacker Henry Russo have been hitting the Hood's main "points of business" that has lead the Hood to kill his employes and taking matters into his own hands. Meanwhile, the Punisher and Henry decide that the next place to hit is a warehouse that is being used by the Shaolin Scientist Squad for trafficking human organs. As Castle entered he realized that there's no survivors and gets attack by the Scientist Squad and by what it seems is a SWAT team. As he escapes using the sewers Henry discovers that the SWAT team was send by the Hood. At the end the Punisher gets caught and is shot multiple times.

Retrieved from "https://heykidscomics.fandom.com/wiki/Punisher_Vol_7_3?oldid=1450304"
Community content is available under CC-BY-SA unless otherwise noted.