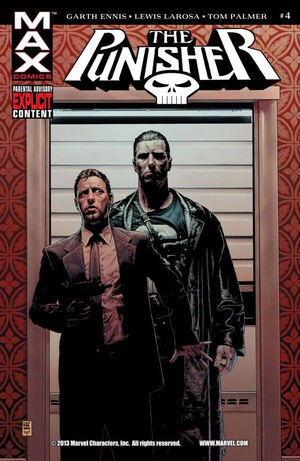 Frank Castle manages to survive the attack of the SWAT team send by The Hood and killed them all. Then he starts to hunt down the backup. Meanwhile the Hood finds out about this and tracks down Henry Russo who has been helping the Punisher to escape. When he finds him, he sends Grizzly to kill him, fortunately, Henty put decoys in different places of the city that allowed him to run before the Hood's goon showed up. When Henry and the Punisher reunited again, they started to plan how to destroy the Hood. Henry showed him that he had been tracking Robbins and that they were ready to fight him. Castle then put an Ant-man helmet, arrows, a shield and a special gauntlet and went to find the Hood. Then, as the Punisher goes to kill Robbins, Microchip is revealed to be the Hood's hacker, and that he has warned that Castle is coming.

Retrieved from "https://heykidscomics.fandom.com/wiki/Punisher_Vol_7_4?oldid=1722225"
Community content is available under CC-BY-SA unless otherwise noted.