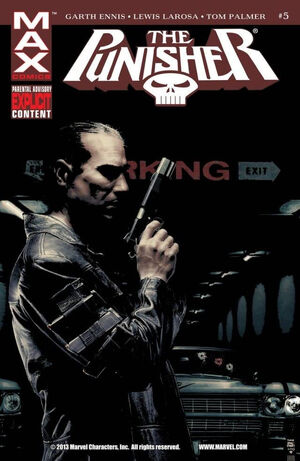 A guy delivers a prepaid pizza to the hiding place of The Hood The goons that eat it get poisoned and, the ones that don't are shot to the head by the Punisher. He keeps killing and blowing everything he passes until he reaches the basement. There he's old partner Microchip who was revived by the Hood makes him an offer. If he goes away, Robbins will revive his family, if he doesn't he will die. Castle tells him that he doesn't make pacts with demons and starts to kill everybody in the room. In the end, he destroys the entire building using C4 and escapes with a Punisher-like motorcycle. An upset Hood uses the powers of Dormammu to ressurect the villains that were killed by Scourge of the Underworld in order to form a squad that will take down the Punisher as an order from Osborn.

Retrieved from "https://heykidscomics.fandom.com/wiki/Punisher_Vol_7_5?oldid=1450306"
Community content is available under CC-BY-SA unless otherwise noted.