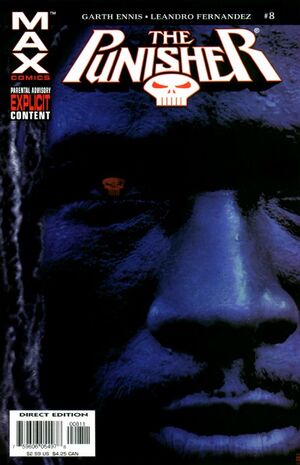 Frank Castle finds himself the target of a band of Avengers, out of place, out of time and out for The Punisher’s blood. With no idea how Microchip brought them to the here and now, and with G.W. Bridge’s life in the hands of the henchmen of The Hood, Frank must survive the fury of Earth’s Mightiest Heroes long enough to unravel the mystery of their arrival. The truth will leave Frank with a terrible decision; in order to save his friend -- The Avengers must die.

Retrieved from "https://heykidscomics.fandom.com/wiki/Punisher_Vol_7_8?oldid=1753316"
Community content is available under CC-BY-SA unless otherwise noted.