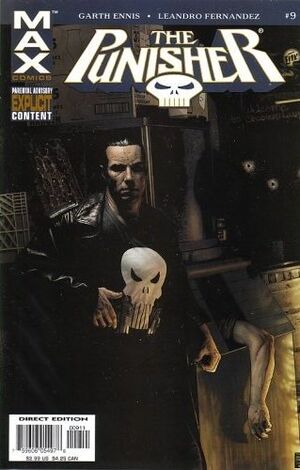 “DEAD END,” PART 4 It’s one of those days… Gunning for the Punisher, the monstrous and impenetrable tank of the Hijacker lays waste to New York…Frank Castle uncovers the terrible history of his brand-new assistant, Henry (an origin guaranteed to astonish)…and someone just dug up the caskets of Castle’s family (that’s got to end badly).

Retrieved from "https://heykidscomics.fandom.com/wiki/Punisher_Vol_7_9?oldid=1728469"
Community content is available under CC-BY-SA unless otherwise noted.