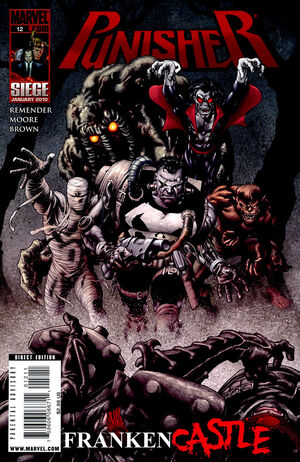 During a late night stakeout outside Rachel Cole's apartment, Ozzy Clemons tells Bolt he is proud of him for telling the truth, even if Bolt isn't happy that he is their poster boy. Later on, Rachel shows up at Norah's apartment while she is having sex with her boyfriend Phil Ulrich. Rachel asks for her help, so Norah assumes she wants another peek at her notes on the Exchange. Despite looking without her permission, Rachel isn't sorry, but Norah says she let her do it.

Rachel, inside the Lion's Head Pub, gets a text message from Frank. Outside, Frank holds up her picture, angry at her for not getting her priorities straight. Rachel fights with him over the picture, but she is soon beaten to the ground.

Frank takes the picture out of its frame and takes it to his gas station hideout in Queens. There, he orders her to take everything out of her pockets and puts the weapons into one section and other items, such as her iPhone and matches, in another section. He then tells her that she died with everyone else at her wedding and the dead are left with a mission and the tools needed to carry out that mission. However, she can still feel the pain of losing her loved ones and wants to know how to make it stop. Frank tells her that only the living get over things, and if that's what she wants she should get a lawyer and she'll be acquitted for temporary insanity.

Frank wants to know if she will continue the mission without distraction. She proves her loyalty by burning her wedding photo with a match.

• The Omega-effect has reshuffled the deck.

• Even punishment has a code and Frank Castle lays down the law for Rachel Cole.

Retrieved from "https://heykidscomics.fandom.com/wiki/Punisher_Vol_8_12?oldid=1450329"
Community content is available under CC-BY-SA unless otherwise noted.