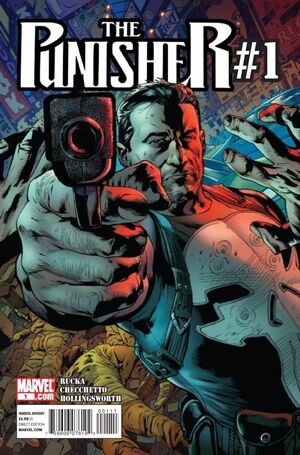 Going against a target guns blazing feels like swimming straight up. I still have to know what kinds of guns to bring, though. Death is immediate... But killing takes patience, or so training says. Sometimes, lots of patience, gathering intel. Been struck in traffic now for 30 minutes. I'm not feeling patient today.

For years, The Punisher has waged a war on crime in New York City with an array of very large guns, but a lead on a major source of drugs, weapons, and more has set his many sights due west.

Retrieved from "https://heykidscomics.fandom.com/wiki/Punisher_Vol_9_1?oldid=1450334"
Community content is available under CC-BY-SA unless otherwise noted.