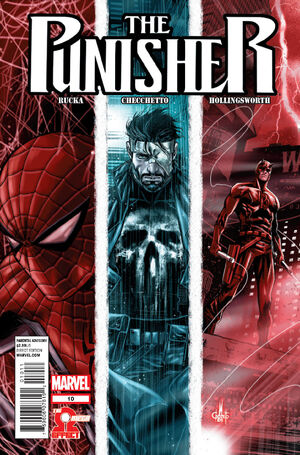 • THE PUNISHER gets incarcerated in a South American prison! Surely he’ll be a model inmate.

• With Frank locked up, who is cleaning up the streets of Los Angeles?

• L.A. has a new crime lord with a personal vendetta against Frank Castle — and with The Punisher gone, it’s open season on the police in LA.

Retrieved from "https://heykidscomics.fandom.com/wiki/Punisher_Vol_9_10?oldid=1488909"
Community content is available under CC-BY-SA unless otherwise noted.