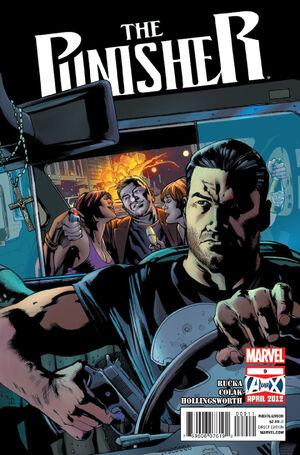 I'm not your sherpa. Come on, sister. Tick, tock.

Appearing in "Friend From Foe"Edit

• In the middle of the Pacific, THE PUNISHER finds himself fighting alongside--or against?--BLACK WIDOW for access to a deadly criminal network.

• But the clock is ticking. Will Frank and Natasha be able to complete their mission before they are taken down by their enemies…or each other?

Retrieved from "https://heykidscomics.fandom.com/wiki/Punisher_Vol_9_9?oldid=1494524"
Community content is available under CC-BY-SA unless otherwise noted.