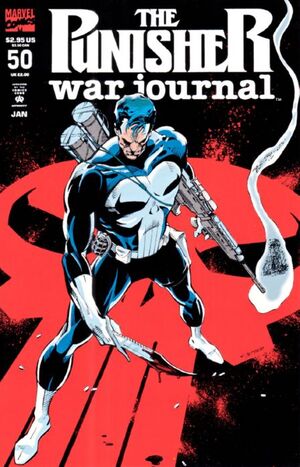 Punishment on a plane! As Frank waits at an airport for micro to get home, He recognizes a terrorist! Can Frank fight the bomb wielding madman without getting himself and the plane full of innocents killed? Will he be back in time to pick up Micro?

Frank is attacked and knocked out by twin crooks, and they steal his guns! An abused wife finds and rescues him from the swamp. she is harassed by one of the twins. As the jealous abuser kills one twin for hitting on his wife, frank take the other out, at take his one gun back. Then the abuser turns his attention to the wife and threatens to kill her for being unfaithful. As the abuser is about to do it, he sees Fran and shoots him in the skull. To his surprise, Frank's alive and kills the man, saving the young woman turned widow. Frank then turns and walks away, off to continue his war.

Retrieved from "https://heykidscomics.fandom.com/wiki/Punisher_War_Journal_Vol_1_50?oldid=1450004"
Community content is available under CC-BY-SA unless otherwise noted.