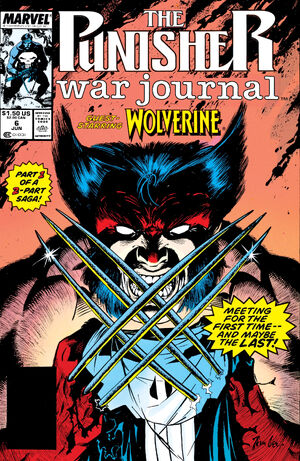 Appearing in "On the Track of Unknown Animals"Edit

Synopsis for "On the Track of Unknown Animals"Edit

Microchip is concerned that the Punisher has been working too hard lately. The strain of punishing the guilty has been getting to him and it has been making him sloppy. Micro suggests a "special" sort of vacation. He wants Frank to work as a safari guide for his friend Richard Wyeth in the Congo searching for a mythological dinosaur known as Mokele Mbembe. Frank thinks the job sounds stupid, but agrees to do it to humor Microchip.

Meanwhile in Madripoor, Wolverine learns that a transporter for an African poaching operation has been making his pickup schedules at his bar. He interrogates the transporter, and learns that the animal hides he has been trafficking in have been coming from the Congo in Africa. Wolverine takes it upon himself to return the pelts to their homeland.

Later, Frank Castle (Under the guise of Chuck Fort) meets with the expedition and arrives in the Congo. He has great difficulty feeling comfortable, but he soon takes a shine to a young Congolese boy named Jean. Frank saves Jean from a venomous black mamba snake. Professor Wyeth's wife Norma is actually in league with a Congolese security officer named Corporal Embambe. Together they seek to kill the dinosaur and sell its head to a rich Texas collector. The young boy Jean discovers their conspiracy and they are forced to kill him. They blame his death on a renegade gorilla. But Frank becomes suspicious and doubts their story.

Castle begins tracking some of the local gorillas to see if Wyeth and Embambe's story holds water. A gorilla launches itself at Castle and he is forced to kill it. Unfortunately, hiding within the trees is Wolverine. Wolverine believes that Castle is the poacher responsible for farming out the illegal animal pelts. He leaps down and attacks Castle and the two begin fighting. Frank puts up a good fight, but Wolverine ultimately beats him and leaves his body in the river as food for alligators.

Retrieved from "https://heykidscomics.fandom.com/wiki/Punisher_War_Journal_Vol_1_6?oldid=1474941"
Community content is available under CC-BY-SA unless otherwise noted.