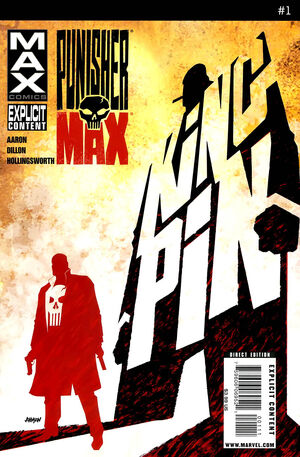 An all-new ongoing series from the acclaimed team of Jason Aaron (WOLVERINE: WEAPON X) and Steve Dillon (PUNISHER: WELCOME BACK FRANK), two guys who were born to tell the exploits of Marvel's most brutal vigilante. Wilson Fisk is a bodyguard for mob boss Don Rigoletto, but he has his eyes on a much bigger prize, and he's gonna use Frank Castle to help him realize his dreams. The biggest story in MAX history begins here, as we witness the birth of the greatest villain the Punisher has ever faced.

Retrieved from "https://heykidscomics.fandom.com/wiki/Punishermax_Vol_1_1?oldid=1450153"
Community content is available under CC-BY-SA unless otherwise noted.