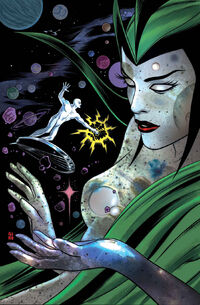 I am the almost-now. The yet to be. I am the Queen of Nevers.

During one of those moments, her heart was stolen by Incredulous Zed, who was helped by a mysterious benefactor, using the Edge of Reality, a sword which could cut through reality itself. Her heart was used to empower the Impericon.[2]

As she approached said planet to reclaim her heart back, numerous "champions" were selected by Incredulous Zed, but failed to defeat her.[3] The latest one was the former Herald of Galactus the Silver Surfer. He confronted the Queen and destroyed Zed's observing drones to try and talk to her freely. Determined to fight for all the futures, the Queen used her power to tear the Surfer apart by making him experience all possible futures at once. However, the Surfer was saved by Dawn Greenwood, the person Zed captured as a leverage to make the Surfer fight her, whom upon finding the Queen's heart in the Impericon made a wish to save the Surfer. The Never Queen explained to the Surfer the power of wishes, and told him her nature as the representation of possibility, and that without her heart, with each moment that passed, an infinite number of futures died inside her. After understanding the Queen's motivations, the Surfer agreed to get her heart back.[2]

With the help of Dawn Greenwood, the Silver Surfer retrieved the Queen's heart, destroying the Impericon in the process, though he held it together with the Power Cosmic long enough for its inhabitants to escape. As Silver Surfer later confronted the Incredulous Zed, Dawn was the one to finally get the heart back to the Never Queen. The Silver Surfer defeated Zed when he was stabbed with the Edge of Reality. For his crime, Eternity cast him out of the universe and into the Lands of Couldn't-Be-Shouldn't-Be, where he was enslaved by Glorian, and transformed into the lowly Zee. Dawn and the Surfer bid farewell to the Queen as she faded away. She was reunited with Eternity, who asked her why the Surfer or Dawn hadn't reach their potential in the moments when anything could happen, but accomplished this now. She told him that now that the Surfer and Dawn were together, those moments were every moment.[1]

The Queen of Nevers perished when the Multiverse met its end due to the phenomenon known as incursions.[4] She was brought back once her recreated heart was found by Dawn Greenwood.[5] Not long afterwards, as a consequence of the Multiverse's rebirth, Lord Chaos and Master Order fused togehter into Logos to install themselves as the new embodiment of multiversal law. When they annihilated the Celestials, the Queen of Nevers managed to whisk the One Above All to safety.[6] During the final fight against the evil First Firmament who had been pulling the strings behind Logos, the Queen of Nevers used the One Above All to kickstart the rebirth of the Celestials.[7]

Retrieved from "https://heykidscomics.fandom.com/wiki/Queen_of_Nevers_(Earth-616)?oldid=1655677"
Community content is available under CC-BY-SA unless otherwise noted.