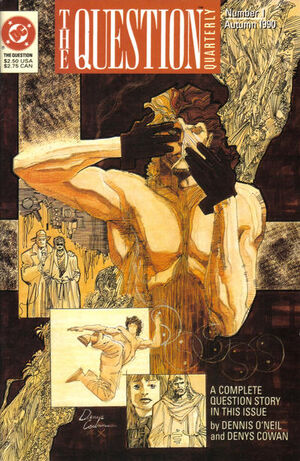 Take a big hit of this yucky-poo, grab some zees and then I'll find an elephant for you to ride or something.

Appearing in "Any Man's Death"Edit

Synopsis for "Any Man's Death"Edit

In the Brazilian rainforest, Vic Sage returns to a native village with medicine for Jacqueline Connelly only to find that loggers have come to the village, razed it and taken Jackie away. Vic goes to the loggers' camp and gets taken down with a tranquilizer dart.

When he wakes up tied to a chair, he tells the leader he has arrived to help Jackie. The leader offers him a deal. Kill a rival drug dealer and he will release the girl into Vic's custody. Vic agrees on the conditions that he can see Jackie and give her her medicine before he leaves. The leader agrees and tells Vic that the woman he is to kill is named Janice, his sister.

Vic gets to Silva de Plata and puts on a costume similar to his old Question togs to blend into the party atmosphere. There is a celebration similar to Mardi Gras taking place. The Question finds Janice in heavy make-up and costumed. They fight. She escapes. The Question follows her to a shack where he takes out the guards and finds Jackie. He grabs her and they flee only to be confronted by Janice. She gets hold of Jackie and goes to kill her when Vic shoots Janice instead. Janice then falls into the river, her make-up begins to wash off revealing that "she" is really a he -- Tirseus, the logger leader who originally kidnapped Jacqueline, and sent the Question on a wild goose chase in the first place.

Retrieved from "https://heykidscomics.fandom.com/wiki/Question_Quarterly_Vol_1_1?oldid=1455709"
Community content is available under CC-BY-SA unless otherwise noted.