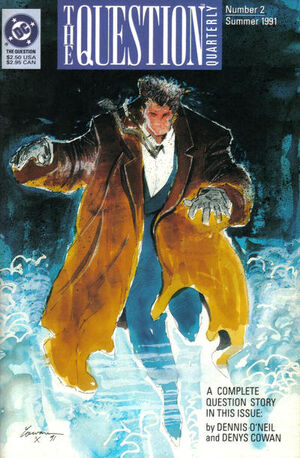 I thought I was bringing a child home to her mother but all I was really doing... was moving from one combat zone to another.

In the Brazilian village, a fortune teller informs Vic Sage that Jackie will die within two weeks.

Vic returns to his hut, where Jackie lies in bed, sick. He tells her they'll go home, to Hub City. When he steps outside the hut, he is assaulted by a group of men. He holds his own until one of them gets a garrote around his neck. A Brazilian named Marco enters the fray to assist Vic. They defeat the men and go to Vic's hut to heal his cut arm.

Marco tells Vic they have to fight. He's been praying to the patron saint of Martial Arts, Saint Bruce, for a worthy opponent. Vic tells him, after he gets Jackie back to Hub City, he'll fight him.

Marco has a cousin with a truck. They borrow it and the three of them head to the train station. Soon after, several bandits try to take the truck and the Brazilian handles them all. They make it to the tracks and hop a train to Hub City.

When they give Jackie back to Myra Connelly, she takes her daughter to a local doctor. The doctor tells her he can give Jackie a couple more days with some medicine from the hospital, however, Jackie is dying.

Myra, Vic and Marco take Jackie to the hospital, but while there, she dies from her illness. After hearing the sad news from the doctor, Vic and Marco head outside to an isolated spot to begin their fight.

Retrieved from "https://heykidscomics.fandom.com/wiki/Question_Quarterly_Vol_1_2?oldid=1455710"
Community content is available under CC-BY-SA unless otherwise noted.