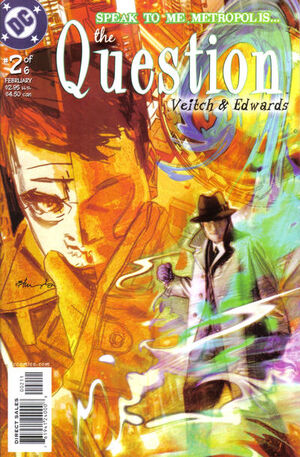 Jimmy, you're right! It is a lens! It's concentrating the sun's rays, just like a kid with a magnifying glass! It's big enough to bring Metropolis Bay to a steady boil... and it's heading this way!

Appearing in "As Above So Below"Edit

Synopsis for "As Above So Below"Edit

Lex Luthor gives a press conference, introducing Metropolis' to the groundbreaking of his Science Spire.

Meanwhile, The Question walks the city and watches as the sunlight, focused through a giant lens, beams down, tearing through Metropolis and destroying everything in its path. Superman arrives to stop the destruction while the Question thwarts a couple of bank robbers who were hoping to go unnoticed during the distraction.

Retrieved from "https://heykidscomics.fandom.com/wiki/Question_Vol_2_2?oldid=1455752"
Community content is available under CC-BY-SA unless otherwise noted.