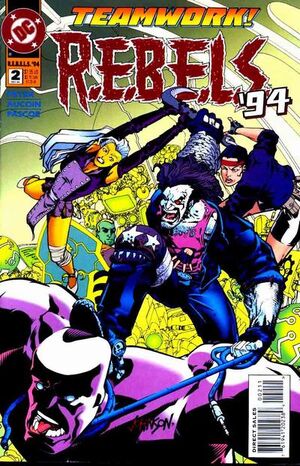 Ya psycho bastich! Ya just doused my romantic flame!

Appearing in "The Ties That Bind"Edit

Synopsis for "The Ties That Bind"Edit

On their ship, Dox accuses Strata of sabotaging the R.E.B.E.L.S. integrity by turning Green Lantern against them. He even goes so far as to accuse her of collaborating with the L.E.G.I.O.N. Dox orders the others to apprehend Strata and take her to the brig, but they refuse. Lobo however, is only too happy to obey this particular order. The other R.E.B.E.L.S. rise to Strata's defense, and Lobo begins plowing through them. They prove to wiley for the Czarnian however and even Borb Borbb manages to tire Lobo out. Strata meanwhile, takes her frustration out on Dox by throttling him. The others succeed in pulling her off of him.

Back on Cairn, Lyrl Dox provides Garv with a modified L.E.G.I.O.N. gunship for his hunt for Strata. Garv makes it clear that he is not re-joining the L.E.G.I.O.N. He is only going to recover his wife and hurt Vril Dox. Lydea covertly tells Lyrl that they should brainwash Garv, but Lyrl doesn't feel its necessary.

Later, Dox pilots the ship and takes out a L.E.G.I.O.N. satellite. He then lands the ship on an alien planet. As he exits, the tells the others that he is disbanding the R.E.B.E.L.S. and he expects them all to be gone by the time he returns; everyone but Lobo that is. Dox goes to a local chop-shop and the aliens working inside all know that he was once the leader of the L.E.G.I.O.N. A group of them level their weapons at Dox's head.

Retrieved from "https://heykidscomics.fandom.com/wiki/R.E.B.E.L.S._Vol_1_2?oldid=1455759"
Community content is available under CC-BY-SA unless otherwise noted.