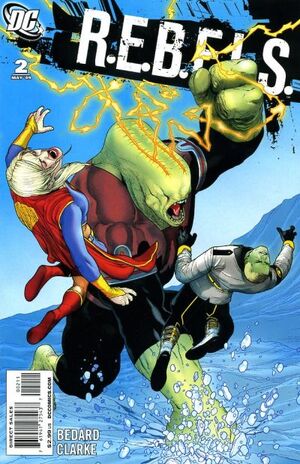 You must survive, if I am ever to be born. To that end, your first imperative is to gather new allies.

Appearing in "The First Recruit"Edit

Synopsis for "The First Recruit"Edit

The L.E.G.I.O.N. strike force has tracked Vril Dox and Supergirl and her passenger to a medical centre in a South Pole base. They open fire, and Supergirl flies further, hoping to not risk any other lives. Vril Dox II, however, is no help, as he is being accosted by a hologram of Brainiac 5, who gets waved away - Vril Dox has no time for "programs masquerading as people". The hologram comes to the point: it was given to him by Brainiac 5 of the Legion of Super-Heroes, his descendant. 31st Century archives contain no information about Vril beyond today, and since Vril has not get guaranteed Brainiac 5's existence by furthering his line, and is in dire danger, the program offers to help, to safeguard the existence of its creator. It give him access to information on the Legion of Super-Heroes, telling him that if he forms a group similar to them, he stands a better chance of surviving. Vril refuses to be led around by the nose, and asks who has hijacks LEGION. Brainiac doesn't answer, but warns him that his foe is an order of magnitude beyond anyone he's ever faced. Brainiac 5 encourages im to recruit Supergirl and leave Earth. Vril wakes up, but this distracts Supergirl for long enough for Tribulus, LEGION's monstrous weapon, to knock hero out. Vril is trapped by Skwaul's telekinesis and Amon Hakk cuffs him for transport. However, Skwaul's telekinesis is not very strong, and Vril is able to distract his foes long enough to make an apparent break, causing Hakk to shoot Getorix. Since Getorix controlled Tribulus, the monster goes berserk. Vril uses this to steal the control implant from Getorix and gets Supergirl to insert it in his head. Now that he has Tribulus, he gets the monster to knock out Supergirl and absconds with the L.E.G.I.O.N. ship.

On the ship, the Brainiac 5 hologram lectures him for not following the Legion of Super-Heroes personnel files, but Vril points out that the files reference a group called the Fatal Five... and a monster called Validus. Vril will build his team, but will do in his own way. His next stop is the Rann Nebula, where he finds the Omega Men. He informs them that his computer-woman, Silica, was subverted by someone else, and his organization has been taken by an unknown foe. Now, 83 worlds who were under L.E.G.I.O.N. protection have been taken over, and he owes them his word. He asks for the help of Elu of the Omega Men, but the Omega Men have a counter-offer - they will single-handedly raid LEGION headquarters,steal everything they can get, and sell it back to him. Annoyed, Vril mimics Getorix' voice, summoning a a LEGION ship that thinks he is a friend. The Omega Men make a run for Oa, and Vril makes a course for Starhaven.

At Starhaven, he is able to leverage his newfound knowledge of the future to gain the trust of the locals. One of them, a woman named Wildstar, is regarded as a freak by the tribe, and she offers to go with him. She demonstrates the tracking ability by "seeing" Tribulus, even though he is hidden in the ship. Vril offers to give her the power of true flight, in exchange for her service. Wildstar agrees, just before she sees some sort of full-body spacesuit. Behind her, Vril Dox pulls out a weapon...

Retrieved from "https://heykidscomics.fandom.com/wiki/R.E.B.E.L.S._Vol_2_2?oldid=1455775"
Community content is available under CC-BY-SA unless otherwise noted.