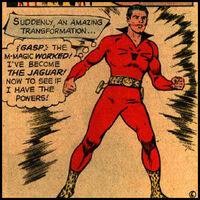 When Zoologist Ralph Hardy was on exploration, he noticed a white jaguar. Before he could pursue it, an earthquake occurred and a huge serpent-like dinosaur emerged from the cracked ground. He ran for safety inside the ruins of an Incan Temple.

Once inside, he noticed the jaguar's tracks and followed them to an alter. Hanging off it, was a belt buckle with an emblem of a white jaguar. Hardley began to read the inscription on the wall, which noted only an animal lover could wear the buckle and be transformed into a human Jaguar.

He also noticed another large mural depicting the monster serpent. As he continued to read about the history of the temple, he learned that the belt was created to stop the rampage of the creature, and that it was up to him to wear the belt and fulfill that destiny.

Nucleon-Energy Belt: by saying "Jaguar", he gains his powers, and transforms into the costumed hero.

Retrieved from "https://heykidscomics.fandom.com/wiki/Ralph_Hardy_(Earth-MLJ)?oldid=1581656"
Community content is available under CC-BY-SA unless otherwise noted.