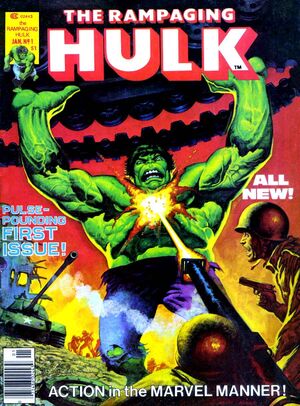 Appearing in "The Krylorian Conspiracy / Enter the Hulk! / Saucers over the Spanish Stairway! / The Return of the Gargoyle! / A Wild Hulk Chase!"Edit

Synopsis for "The Krylorian Conspiracy / Enter the Hulk! / Saucers over the Spanish Stairway! / The Return of the Gargoyle! / A Wild Hulk Chase!"Edit

This story begins by recapping the origins of the Hulk. This story taking place during a time when Bruce Banner would be sealed in a chamber in a secret lab at night, the Hulk escapes and battles the military before changing back into Bruce Banner.

Meanwhile, aliens known as the Krylorians have arrived on Earth for the purposes of invading it and their ships have been sighted over Rome. Deciding to take a vacation to Rome, Bruce Banner goes takes it with Rick Jones. Along the way, Bruce turns into the Hulk and smashes out of the plane. The Hulk fights one of the Krylorian spy, and is confronted by his old foe the Gargoyle, who has found himself mutated back into a Gargoyle form. He seeks an alliance with the Krylorians, however the Krylorians are plotting to use him for their own ends and ultimately betray him.

The Hulk and Rick Jones however team up with Bereet, a renegade Krylorian who uses techno-art pieces as weapons, and with the help of the Gargoyle (who sacrifices himself to destroy some of the Krylorian ships) manage to fight off the initial invasion fleet. With the initial attack over, Bereet warns the Hulk and Rick that this is just the beginning. They both agree to help Bereet stop the invasion plans of her own people.

Retrieved from "https://heykidscomics.fandom.com/wiki/Rampaging_Hulk_Vol_1_1?oldid=1449943"
Community content is available under CC-BY-SA unless otherwise noted.