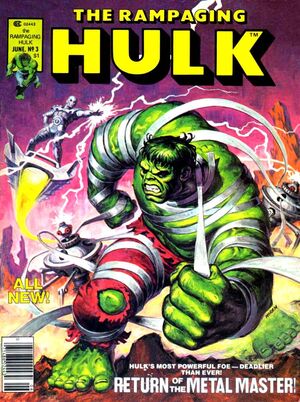 Appearing in "The Monster and the Metal Master"Edit

Synopsis for "The Monster and the Metal Master"Edit

Having taken shelter at an Inn, just outside of Paris France, Bruce Banner, Bereet and Rick Jones try to determine what to do about the Krylorians who intend to invade Earth. Bruce changes into the Hulk when the inn keepers cleaning boy Spirou is casted out of the Inn. The Hulk attacks the man and sends him running.

The trio are targeted by the Metal Master, who has returned to Earth on behalf of the Krylorians who have hired him to use his special talents against the Hulk and the others. The battle finds them sucked into Bereet's bag which contains all her techno-art creations. There, the Metal Master uses his powers to turn Bereet's creations against them. The Hulk manages to defeat the Metal Master who is ultimately destroyed when the Hulk smashes the robot he's mentally linked too. This also results in the destruction of most of Bereet's techno-art creations. However, they manage to make it out alive, and are released from Bereet's purse thanks to Spirou keeping it safe for them.

Appearing in "Notes from Eden"Edit

Synopsis for "Notes from Eden"Edit

Synopsis for "And There Shall Come Death!"Edit

Retrieved from "https://heykidscomics.fandom.com/wiki/Rampaging_Hulk_Vol_1_3?oldid=1449945"
Community content is available under CC-BY-SA unless otherwise noted.