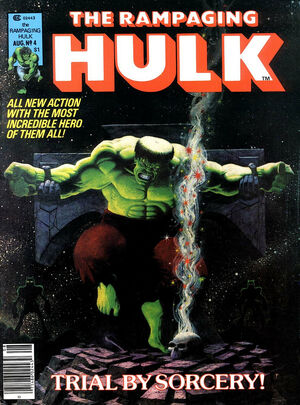 A pin-up of the Hulk based on the events of Avengers #1.

Appearing in "The Other Side of Night!"Edit

Synopsis for "The Other Side of Night!"Edit

In a distant galaxy, the mage Chen K'an recites an incantation over a mystical pool. Splashing water from the pool forms a puddle that, in turn, casts the reflections of Dr. Banner and Bereet. At that moment, Dr. Banner, Rick Jones and Bereet are in an underground cave in Europe where they've discovered a grand supply of Krylorian equipment that has apparently been abandoned for some time. Dr. Banner and Bereet speculate on the condition and purpose of this equipment when Banner is suddenly zapped away in a ball of energy. As it turns out, Banner has been transported to Chen K'an's castle.

Upon seeing Bruce Banner materialize, Chen K'an apologizes then explains that it's not Banner he wants, but rather "--the monster locked within." Chen K'an transforms Banner into his raging alter ego but quickly tires of the Hulk's threats to "smash," so he bestows upon the goliath just enough of Banner's mind to allow for a crude but moderate level of reasoning and craftiness. Chen K'an explains that he wants the Hulk's help in acquiring something called the Star of Catalax. K'an was once ruler of his planet, but it has become a diseased and chaotic land, and the Star is a source of great power.

Hulk is reluctant to help until Chen K'an explains that his world was once a magnificent place where its inhabitants spent their energies exploring gifts of the higher mind. The mage recounts how he was once attacked during a meditative spell by demons controlled by his enemy, a sorceress named Lyissa. The attack had, for a time, separated the mage's physical and astral forms. By the time Chen K'an had heeled himself, he found his world left in ruins. His own words condemn it as "--a land of savage barbarians, ravaged by mutations and unholy cannibals."

The Hulk agrees to help. Using monstrous leaps, he carries Chen K'an across the land toward Tyroc, Citadel of Terror, where resides Chen K'an's enemy, Lyissa. On the way, the pair is attacked by a horde of winged demons, which are dispatched by The Hulk easily enough. Next, Chen K'an observes a cannibal feeding upon a dead corpse. Disgusted by the sight, and reminded of how far his world has fallen; Chen K'an dispatches the cannibal.

But it's not long before the pair is attacked again by a larger and more formidable demon. The Hulk engages the creature in battle. Both tumble into a murky body of water; after a period of time, only the Hulk resurfaces.

In her own citadel, Lyissa pouts and postures until Chen K'an arrives with the Hulk. The mage demands that Lyissa surrender the Star of Catalax. The sorceress responds by opening a mystical doorway to a fearsome, dark dimension. A horde of vile creatures of every shape and size come pouring through. Fighting side-by-side, the Hulk and Chen K'an battle courageously against overwhelming odds until Chen K'an steps away, leaving Hulk to fight off all of Lyissa's forces while K'an directly engages Lyissa in battle. After a trying conflict, Chen K'an manages to banish the demons and their mistress. Having now gained the Star of Catalax, Chen K'an expresses his gratitude for the Hulk's help.

The Hulk asks how the Star will save the mage's fallen world. Chen K'an explains that nothing can save his world; because it has become a perversion of what it used to be, and no amount of magic can restore it to it's former glory. Chen K'an transports the protesting Hulk back to Earth and out of harm's way and then proceeds to use the Star of Catalax destroy his own planet. The planet endures various stages of physical upheaval before exploding into fragments.

The Hulk reappears somewhere in France, speaking out loud in his standard dim & brutish manner again. He claims to feel very sad, only he cannot remember why.

Appearing in "Gallery of Villains"Edit

Synopsis for "Gallery of Villains"Edit

Synopsis for "Return from Oblivion!"Edit

Retrieved from "https://heykidscomics.fandom.com/wiki/Rampaging_Hulk_Vol_1_4?oldid=1449946"
Community content is available under CC-BY-SA unless otherwise noted.