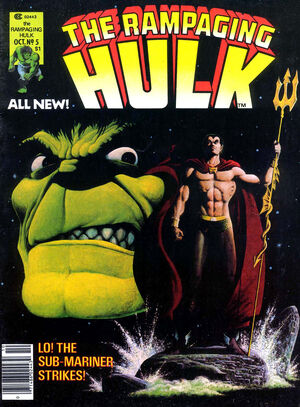 A pin-up of the Hulk, based on events from Incredible Hulk #3

Appearing in "Lo, the Sub-Mariner Strikes!"Edit

Synopsis for "Lo, the Sub-Mariner Strikes!"Edit

Story continued from Rampaging Hulk #3... The kingdom of Atlantis is attacked by strange alien sea-creatures, prompting Prince Namor to go to the surface world to investigate. Meanwhile in France; the Hulk, Rick Jones and Bereet escape the French police and return Spirou to the inn where he lives. Hulk uses his superior strength to "convince" the inn keeper to be nicer to the boy. Deciding to go back to Rome to try and figure out the next plan in the Krylorians attempt at invading Earth, the trio arrives around the same time the Sub-Mariner does.

When Namor attracts a mob who seeks to attack him, Banner and his allies show up to see what the fuss is about. Bereet finds herself attracted to the Sub-Mariner, but upon her approaching him she is knocked out by a brick tossed by the mob. This causes Banner to change into the Hulk and attack the Sub-Mariner. During the fight, the Sub-Mariner douses himself in water to boost his strength and easily over-powers the Hulk, before taking Bereet and departing.

Retrieved from "https://heykidscomics.fandom.com/wiki/Rampaging_Hulk_Vol_1_5?oldid=1449947"
Community content is available under CC-BY-SA unless otherwise noted.