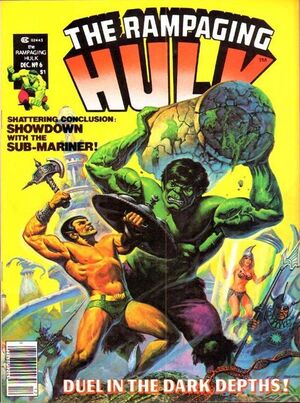 Appearing in "And All the Sea, with Monsters!"Edit

Synopsis for "And All the Sea, with Monsters!"Edit

Continued from last issue... With Bereet captured by the Sub-Mariner, Rick Jones and the Hulk bounds after them. Leaving Rick behind on an island, the Hulk dives in after the the Sub-Mariner, where he is attacked by a Krylorians and their mutated sea beasts.

During the fight, the Hulk changes back into Bruce Banner and is forced to retreat, but not before he was able to damage the alien ship before floating to the surface. Meanwhile, Bereet sends her banshee mask out to collect Rick and Bruce. The ship arrives just as Bruce has finished modifying Krylorian diving gear so that they can use it.

Retrieved from "https://heykidscomics.fandom.com/wiki/Rampaging_Hulk_Vol_1_6?oldid=1449948"
Community content is available under CC-BY-SA unless otherwise noted.