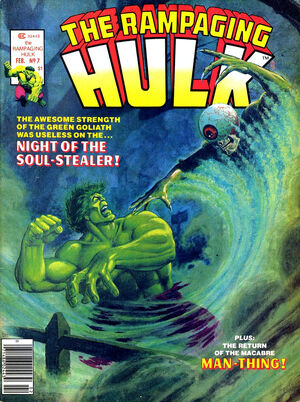 Appearing in "Night of the Wraith!"Edit

Synopsis for "Night of the Wraith!"Edit

In the Balkan Mountains the Hulk gets upset and strikes out at Rick. Reaching into her bag for protection, she releases the Soul-Shade, a creature created from the souls and negative emotions of her destroyed techno-art creations. This creature then begins to attack the Hulk, the Hulk fights back but is unable to inflict harm on the creation.

As the Hulk goes about the country side attacking the creature, and whatever it possesses, Bereet and Rick work together in creation the Bliss Cannon, which will bombard the Soul-Shade with her true feelings towards her late-creations. Through the conflict, Bereet is captured by the superstitious Balkans and is about to be burnt at the stake when she is possessed by the Soul-Shade.

Giving the Hulk the Bliss Cannon, the jade giant is able to fell it by blasting Bereet with it, destroying the Soul-Shade and saving her. As a result of the Shade's destruction, an alien garden was created insuring that the legacy of her techno-art creations live on.

Appearing in "Among the Great Divide!"Edit

Synopsis for "Among the Great Divide!"Edit

After being attacked by a mad she-woman, the Man-Thing is drawn to the a mother and her daughter camping in the swamp. The daughter, Andrea, has suppressed her emotions so much that each emotion has become a separate personality unto itself. Beginning as just voices in her head, being in the swamp causes these personalities to manifest in the flesh.

After another argument with her mother, over allowing her to become independent of her mother, Andrea leaves in the family vehicle. Following her, the Man-Thing finds her after her personalities have manifested in a singles-bar where they reject a local swinger. When the jilted man and a bunch his friends try to have their way with Andrea, her personalities spring forth and fight them off.

The Man-Thing arrives and attacks each of the personalities, they all burn at his touch, causing them to return to her body. Andrea, then stumbles off to the Citrusville hospital, and the Man-Thing returns to the swamp which he has been charged to protect, the memories of the nights events already fading in the mire-monster's mind.

Retrieved from "https://heykidscomics.fandom.com/wiki/Rampaging_Hulk_Vol_1_7?oldid=1449949"
Community content is available under CC-BY-SA unless otherwise noted.