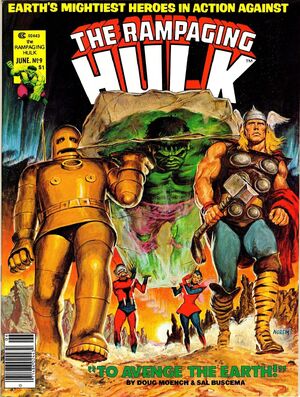 A pin-up of the Hulk depicting an event from Incredible Hulk #150.

Appearing in "To Avenge the Earth"Edit

Synopsis for "To Avenge the Earth"Edit

Continued from last issue... With the Hulk battling a Krylorian disguised as Iron Man, their battle has attracted the attention of the real Iron Man, Thor, Ant Man, and the Wasp who try to stop the battle. The heroes end up battling both the Hulk and the fake Iron Man. Their fight takes them into the secret Krylorian base hidden beneath the site of the Worlds Fair construction site.

Although they are initially confused and tricked by the Krylorian disguising itself as the Hulk as well as the one who posed as a faux Iron Man. The battle rages on until the Krylorian computers are destroyed, forcing them to retreat. The Hulk coming to the rescue of Bereet and Rick Jones when they accidentally freed the faux Hulk by mistake.

With the battle over, the Hulk grabs Bereet and Rick and escape the scene, they all rejoice over the defeat of the Krylorian's, although Bereet doesn't know if she should be happy, or cry.

Appearing in "The Wrath of Raga-Shah!"Edit


Synopsis for "The Wrath of Raga-Shah!"Edit

Continued from earlier episodes in Savage Tales #9-10, re-introducing Kali cult leader Raga-Shah, and Shanna's quest to defeat him and avenge the deaths of SHIELD agent Singh and Shanna's pet leopards. Two years have passed. Shanna has abandoned the hunt, and has relocated to San Pedro to rebuild her life. She reflects that, time and again, those near her have died violently, while Shanna found ways to survive. Now she attends veterinary college and is in therapy with Dr. Betz. Shanna has also acquired Ananta, a wild python. When she experiences tension or rage, she has violent struggles with Ananta in a little "jungle" hidden inside her cottage, a thing Shanna conceals from Dr. Betz. [Ananta is named after the Hindu god of eternity.]

Shanna's girlfriend Madeleine takes her to shop at a new Indian-themed mall. The women stumble across Raga-Shah. Shanna attacks her old enemy, but is restrained by security guards. Raga-Shah, who proves to be the new mall's owner, brushes off the Incident, but later sends a team of assassins after Shanna. After a struggle, Shanna is struck with a drugged blade and collapses. She awakens in Raga-Shah's temple, bound to an altar. He boasts that he will sacrifice Shanna to his gods; she tries to mock him; he torments her with a knife. Shanna frees herself, and clears away the underlings. She confronts Raga-Shah at last. When the high priest asks if she means to slay him, she answers "No, Raga-Shah, I shall leave that to another." Unarmed, Shanna battles, disarms, and captures Raga-Shah.

Her two-year manhunt is ended. Shanna takes Raga-Shah back to her cottage, and feeds him to Ananta.

Retrieved from "https://heykidscomics.fandom.com/wiki/Rampaging_Hulk_Vol_1_9?oldid=1449951"
Community content is available under CC-BY-SA unless otherwise noted.