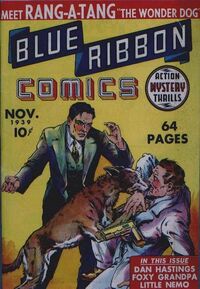 Rang-a-Tang was a circus dog, who was abused by the people at the circus and he ran away from them and became a run-a-way animals for a short time. Later he saved the life of private detective named Hy Speed who took him in. Rang-a-Tang proved to be a brave and loyal companion and an even better crime fighter.

Later Rang-a-Tang teamed up with Richy Waters also known as the Amazing Boy. Rang-a-Tang and Richy had many adventures together.

Retrieved from "https://heykidscomics.fandom.com/wiki/Rang-a-Tang_(Earth-MLJ)?oldid=1587969"
Community content is available under CC-BY-SA unless otherwise noted.