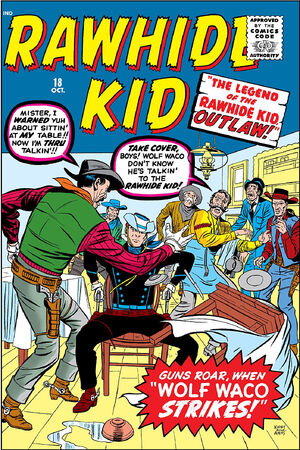 Appearing in "At the Mercy of Wolf Waco!"Edit

Synopsis for "At the Mercy of Wolf Waco!"Edit

Having been recognized in town the Rawhide Kid mounts his horse Nightwind and flees town, using his superior gunslinging skills to shoots the weapons out of the hands of those who try to stop him. Getting away from his pursuers, the Kid finds a cave to take cover in. Inside he is confronted by an outlaw named Wolf Waco and his gang.

Wolf tries to attack the Rawhide Kid, but the Kid proves to be the superior fighter, impressing Wolf immensely, so he offers the Kid an ultimatum: ride with his gang or die. While Wolf and his men fight over including the Kid in their gang, the Kid questions why he shouldn't join up with them now that he is a hunted outlaw. The Rawhide Kid decides to join the gang, but he begins to have second thoughts when Wolf tells the Kid that they are going to rob a mail train.

They get to the railroad tracks and Wolf's gang blows up the tracks forcing the train to stop. While Wolf and his men shoot it out with the guards aboard the train, the Rawhide Kid stands back, wondering what he should do. Eventually Waco and his men are forced back and they order the Kid to toss a load of dynamite at the train. When the Kid refuses to kill innocent people, they threaten to shoot him. Mounting up on Nightwind, the Rawhide Kid races towards the train with the lit bundle of TNT.

However, instead of tossing it at the train, the Kid tosses it back at Waco and his men, the resulting explosion covering them in a choking cloud of smoke. The Kid then races aboard the train and fights past the guards and convinces them that he is on their side. The Kid the train to ride on a reverse course. Wolf and his men try to chase after it, but the Kid gets back on his horse Nightwind and frightens them off with his superior shooting skills. However Wolf Waco himself is not frightened by the Rawhide Kid, and jumps the young man. The two struggle near the edge of a cliff, but the fight comes to an abrupt end when Waco rolls over the edge and falls to his death. Expecting the Rawhide Kid to come back for a reward for saving the train, the crew is surprised to see the Rawhide Kid riding away alone.

Appearing in "The Midnight Raiders"Edit

Synopsis for "The Midnight Raiders"Edit

Appearing in "A Legend is Born"Edit

Synopsis for "A Legend is Born"Edit

Going into a saloon for a meal in Border City, the Rawhide Kid overhears some men inside talking about how they have heard that he is in the area and tries his hardest not to be recognized. However the description the men have of him is way off: They heard that the Rawhide Kid is a big man of at least six-feet tall and mean looking, nothing like the scrawny 18 year old man that is trying so hard not to be discovered.

Suddenly, Hammer Hogan the local trouble maker comes bursting in spoiling for a fight with someone. Seeing the Rawhide Kid in his favourite seat, Hogan demands that the Kid get out of it and knocks the table out of the way. Not backing down from Hogan's threats, the Kid introduces himself. This sends Hogan into peels of laughter as he does not believe that the young man before him could be the Rawhide Kid. However the Kid proves his claim in short order by shooting the weapons out of Hammer's hands when he draws, then knocks him out, then shows off more of his shooting skills by shooting out the candles off the chandelier before jumping out the window and riding away before the sheriff arrives. When the lawman asks what happened, the men gathered cannot get their facts straight about what the Rawhide Kid looked like.

Retrieved from "https://heykidscomics.fandom.com/wiki/Rawhide_Kid_Vol_1_18?oldid=1450729"
Community content is available under CC-BY-SA unless otherwise noted.