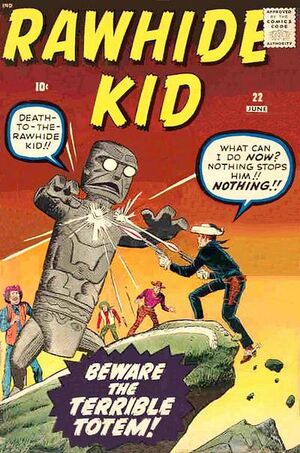 Appearing in "Beware!! The Terrible Totem!!"Edit

Synopsis for "Beware!! The Terrible Totem!!"Edit

The Rawhide Kid is on the run from a posses when his horse Nightwind suddenly trips over a gopher hole sending the Kid sprawling. Unwilling to hurt the lawmen, the Rawhide Kid shoots the reigns on their horses allowing him to mount Nightwind and escape. With the posse still on his heels, the Rawhide Kid sends Nightwind riding off along to send the posse on a false trail until he can get away.

The Kid soon arrives at a nearby silver mine and asks for a job, but the foreman refuses to give him one striking the Kid down. The Rawhide Kid however cannot bring himself to fight back lest he brings the posse to him again. However the situation quickly changes when it one of the miners -- Old Seth Crane -- died below because there wasn't enough air. The foreman then hires the Rawhide Kid on the spot and sends him back down into the shaft. Along the way down he learns from the other workers that the men are forced to mine deeper than legally allowed and face dangerous conditions and that nobody dares stand-up to the foreman who beats those who get out of line.

Down below, they run into Injun Tom, a Native American working in the mine, he warns them that the Living Totem has been freed, but these warnings are dismissed until the Living Totem reveals himself to the workers. As the frightened workers take the elevator back up the Rawhide Kid tries to keep the Totem back with his Colt pistols, but to no effect. Cornered, the Rawhide Kid demands to know what the Living Totem hopes to accomplish and learns that the creature was trapped under the Earth centuries ago, and now he vows to get to the surface and conquer the human race. The Kid manages to slip by and tries to climb up the rope but the creature tries to pull him back down.

Meanwhile on the surface, the workers try to warn the foreman about the Living Totem, but he does not believe them and uses force to send them back down the shaft in the elevator. The elevator descending causes enough of a distraction that allows the Kid to break free. Then clubbing the creature in the leg as it tires to attack the elevator. The Kid then orders the others to go back and grabs the rope to be brought up as well, tossing dirt into the Living Totem's eyes. When they get to the surface the foreman blames the Rawhide Kid for the workers acting up and pulls a gun, but before he can shoot the Kid, the leader of the posse arrives and shoots the gun out of the foreman's hands telling him that the Kid is his prisoner. While they all argue, the Living Totem pulls himself out of the shaft to the surface. The creature then forces them back further into the cave and then seals them inside so the Living Totem can begin his conquest of the surface world. Trapped behind the bolder, the foreman blames the Kid for and attacks the Kid.

Not far away, the Living Totem attacks a stagecoach, while back in the cave the Rawhide Kid and foreman fight it out, a slugfest that the Kid wins. While they were fighting the others were trying to dig a way out, opening a passage that is too small for anyone to crawl out except for the Rawhide Kid. Getting the others to trust him that he won't abandon them, the Kid crawls through the hole and decides that he has to stop the Living Totem first before he breaks the others free and flees, leaving them to believe that he has left them to die. The Rawhide Kid is happy to find Nightwind has returned and uses his horse to catch up with the Living Totem and lures him to a nearby cliff that overlooks Bottomless Canyon. There the Kid blinds the creature again with gunsmoke from his Colt's then pushes him over the cliff. Believing that the Living Totem is trapped forever, the Rawhide Kid then recovers some explosives and uses it to blast all the trapped miners and the lawman free. In thanks the lawman allows the Rawhide Kid go free over the protests of the foreman, who finds himself arrested for not following mining regulations.

Retrieved from "https://heykidscomics.fandom.com/wiki/Rawhide_Kid_Vol_1_22?oldid=1450733"
Community content is available under CC-BY-SA unless otherwise noted.