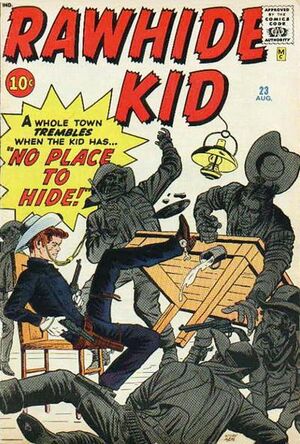 Appearing in "The Origin of the Rawhide Kid!"Edit

Synopsis for "The Origin of the Rawhide Kid!"Edit

Retelling of the story "Beward! The Rawhide Kid!" from Rawhide Kid #17

Rancher Ben Bart raises his adopted son, Johnny, to become the best possible gunfighter he can be. Johnny quickly adapts to wielding the twin "magic" colts and learns a variety of gunfighting techniques including the "Road Agent's Spin" and the "Border Shift". Shortly after his eighteenth birthday, Ben sends Johnny into town to pick up the monthly provisions. While he is gone, two gunfighters named Hawk Brown and Spade encroach upon the Bart ranch. Hawk challenges Ben to a draw, but Spade distracts Ben Bart, allowing Hawk to get the drop on him. The gunslingers leave, cowardly leaving Ben's body dead on the ground.

Johnny returns home only to discover that his beloved father had been killed. Tracking the murderers, he arrives in a nearby saloon where he finds Hawk and Spade. Johnny shoots the revolver out of Hawk's hand, and fires two shots behind his head to disarm Spade (whose reflection he had seen in a mirror).

Determined to rid the world of people like Hawk Brown, Johnny leaves Rawhide atop his trusted steed Nightwind. He soon adopts the identity of the Rawhide Kid.

Appearing in "A Place to Hide!"Edit

Synopsis for "A Place to Hide!"Edit

The Rawhide Kid is sitting down to a meal when he is suddenly surrounded by a gang of men who have recognized the famous outlaw. However the Kid manages to fight them off and shoot out the lantern lighting the saloon, plunging it in darkness. This cover allows the Kid to escape out a window and escapes out of town on his horse Nightwind.

Growing sick of being hunted down constantly the Rawhide Kid begins to wonder if it will ever end. He ends up in the town of Sagebrush where the locals welcome him by catching him in a lasso. Nobody here recognizes who the Rawhide Kid, but he finds himself hassled by Luke Stokes and his goons who try to pick a fight. Unwilling to reveal who he really is, the Rawhide Kid controls his temper and his urge to draw his guns. Luke believes the Kid to be a coward and mockingly kicks him into a puddle in the road before walking off. The Kid is assisted out of the puddle by Luke's sister Nancy who tells the Kid that nobody is willing to stand up to her brother, and though that for a moment the Kid would be the one to finally do it. The Rawhide Kid tries to confide in Nancy, but find that he cannot and walks away in shame.

Going into the local saloon the Rawhide Kid is once more bullied by Luke and his goons when Luke trips him on his way along the bar. Luke tries once again to pick a fight with the Kid, but Rawhide manages to keep his temper in check and stumbles out of saloon. Outside, he witnesses as Nancy is accosted by Montana Joe, a ruthless outlaw who has taken a fancy in her. At first Luke tries to stop Montana from bothering his sister, but when he realizes who he is dealing with Luke turns coward and tells Joe that he can do with his sister what he wishes.

Hearing Nancy call her own brother a coward is what it takes for the Rawhide Kid to give up on hiding who he is and confront Joe himself. The Kid easily trounces Montana Joe with his bare hands and in a gun duel he manages to outdraw him and shoot the guns out of his hands and shoot the gun belt off his pants. This display of gunmanship makes everyone realize that Joe has been fighting it out with the Rawhide Kid. With Montana Joe defeated, the Rawhide Kid then beats up Luke for his earlier bullying and for not sticking up for his sister. When Nancy asks the Rawhide Kid to stay in town, he refuses telling her that now that people know that he is here, eventually gunslingers will come from all around to try and make a reputation for themselves, causing danger for everyone and then leaves.

Appearing in "They Called Him Outlaw!"Edit

Synopsis for "They Called Him Outlaw!"Edit

Retrieved from "https://heykidscomics.fandom.com/wiki/Rawhide_Kid_Vol_1_23?oldid=1450734"
Community content is available under CC-BY-SA unless otherwise noted.