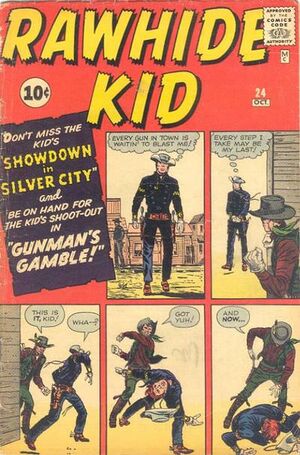 Appearing in "Showdown in Silver City"Edit

Synopsis for "Showdown in Silver City"Edit

The Rawhide Kid has to talk tough to get aboard a coach heading to Silver City due to his outlaw status, the coach driver initially refusing him passage but giving in warning the Kid not to cause any trouble. Also aboard the coach is an older man who has no objections that the Rawhide Kid is riding with them.

Along the way to Silver City the coach is attacked by a band of raiders who wound the driver, causing him to fall off the coach and spooking the horses into running wild. The two passengers try to hold the outlaws off, but the older man is wounded as well. the Kid manages to force them to retreat with his superior gunfighting skills before climbing out and taking control of the reins and using them to stop the horses.

Witnessing this is one of the outlaws that attacked the coach who realizes that he has a striking resemblance to the Rawhide Kid if only he shaves off his facial hair and decides to use this to his advantage. The following day while the Rawhide Kid walks through the streets, the locals are at odds about if they should trust him or not after he saved the stage the day before. As the Kid walks past a nearby alley he is jumped by the outlaw lookalike who then steals his clothes and leaves the Kid tied up in.

The phony Rawhide Kid then begins roughing up the locals and demand that they hand over their valuables. He then robs the local bank and then frees the real Rawhide Kid before he flees out of town. When the real Kid tries to chase after him he is stopped by the angry townspeople, who overpower him and lock him up in the local jail. With the sheriff out of town the Kid is stuck waiting for his trail. However he is not incarcerated for long as when he is given a meal he jumps the guard and breaks out of his cell.

Soon afterword the Rawhide Kid disguises himself as an old man and boards the coach out of Silver City. It is stopped when the Rawhide Kid impostor uses a sniper rifle to shoot at it forcing the driver to stop. When the phony approaches the coach and orders everyone off, the real Rawhide Kid reveals himself and proves the superior gunman. The entire thing is witnessed by sheriff, who turns out to be the old man who was riding with the Rawhide Kid on his way into Silver City. The sheriff thanks the Kid for helping him capture the relief thief and allows him to go free.

Appearing in "The Man Without a Gun!"Edit

Synopsis for "The Man Without a Gun!"Edit

The Rawhide Kid comes upon local businessman Mr. Blade about to take away an elderly woman's house because she was unable to pay the two hundred dollars owing on the mortgage. Unwilling to see a harmless woman being tossed out into the street the Kid tries to intervene and gets smacked across the face for his troubles. Blade orders his man Utah to stand down and then explains to the Kid what the situation. The Kid offers the hundred dollars he has on him and the chance to try and raise the rest.

Mr. Blade accepts the offer, telling the Kid he can earn it by having a little shoot out. The old woman tells the Kid not to try, that he will lose his money, but the Kid refuses. First Blade starts the competition by shooting the sign of a hotel across the street. However the Kid manages to out do Blade by shooting the ropes that hold the sign up. The next test Blade manages to strike a silver dollar tossed into the air twice, when it's the Kid's turn he manages to do it four times.

Furious that he has been defeated in a shoot out, Mr. Blade tries to turn his gun on the Rawhide Kid. However the Kid manages to dodge the shot and then shoot the gun out of Blade's hand. Defeated, Blade promises to turn the mortgage over to the old lady, so she can keep her home.

Retrieved from "https://heykidscomics.fandom.com/wiki/Rawhide_Kid_Vol_1_24?oldid=1450735"
Community content is available under CC-BY-SA unless otherwise noted.