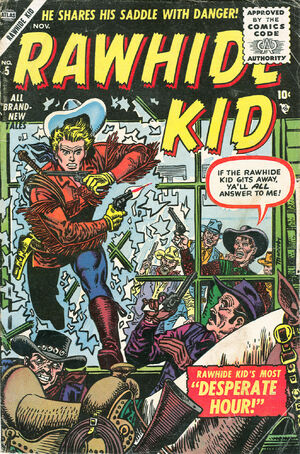 While out riding with his ward Randy Clayton, the Rawhide Kid spots campfire smoke coming from Comanche territory. Believing that the Comanches would not like trespassers on their land, the Kid and Randy go to investigate. They come across a group of men trying to steal furs trapped by the Rawhide Kid's old friend Java Joe and sends them packing. Freeing Java, the Rawhide Kid invites him to come back home with them. Java Joe instantly wins Randy's admiration with stories about his past adventures with the Rawhide Kid. The next morning, the Kid leaves Joe to see Randy off to school while he rides into town.

There, the Kid stops in to talk to the Sheriff, having grown annoyed with Java Joe and not wanting him around anymore. Unbeknownst to the Rawhide Kid, Randy happens to be passing by and overhears part of the conversation and is suddenly brought to tears having not heard the Kid was talking about Joe, and believing that his guardian no longer wants him around. Randy then rides back to his home and tells Java what he overheard and Joe decides that they both should leave. As they ride off they are spotted by the fur thieves that ran afoul of Joe earlier and are ambushed.

Meanwhile, the Rawhide Kid returns home and finds that both Randy and Joe are gone. Using his tracking skills, the Kid manages to track them down and save their lives. In the aftermath, explanations are made and the Rawhide Kid tells them that he has had a change of heart and Java Joe can stay with them after all.

Leaving Randy in town, the Rawhide Kid goes back to the spot where they ran into the cobra and finds stagecoach tracks nearby. Going to the local stage company, he learns that the coach was carrying Lyle Lambert's grandson. Coincidentally, Lambert's grandson comes into the coach office telling the clerk that he lost a basket off the coach. When both the clerk and Rawhide begin pressing him for answers, Lambert dismisses their questions and tells them to forget it and leaves, making the Kid even more suspicious.

Meanwhile, Randy is playing at the school house with some of his friends when his teacher asks Randy and one of the other boys to bring a blanket over to the Lambert house that she knitted as a gift. The boys arrive at the Lambert house and find the yard deserted. Finding a strange shack out back the boys poke their heads in and catch Lambert handling another cobra. He scares the boys off and Randy, recognizing the snake, goes to tell the Rawhide Kid.

The Rawhide Kid rushes back to the ranch where he catches Lambert's grandson outside his room. The Kid knocks him the younger Lambert down and busts through the door and kills the cobra before it can strike Lambert. Lyle admits that his grandson had been acting strange since he returned from India. Following "Lambert" back to the shack, the Rawhide Kid learns that he is not Lambert at all, but a man who killed the younger Lambert and took his place in order to take over the L-Bar-L ranch and sell it. As the two men struggle, Randy lends a helping hand by roping up "Lambert" in a lasso, allowing the Rawhide Kid to take him prisoner.

Appearing in "The Man From Nowhere"Edit

Synopsis for "The Man From Nowhere"Edit

Suddenly, a trapper gets the drop on them and tries to bushwack the Kid and Randy for letting his catch go. With his lightning fast reflexes the Rawhide Kid easily disarms the man and forces him to show them his camp. There they force the man's parter another trapper named Hawk. There they find a young cub chained up and realize that the cub is the child of the mother cat they saved and that they killed its father. After a struggle, the Rawhide Kid frees the young cub and sends the trappers hunting. However Randy becomes attached to the young cub and is reluctant to send it back.

Eventually the Rawhide Kid convinces Randy to let the cub go back to its mother and secretly follows him into the mountains again to make sure he does it and keep him safe. While the cub is happily reunited with its mother, who poses no harm to Randy, the Rawhide Kid manages to stop Hawk and his goon from attacking Randy and the mountain lions again.

Retrieved from "https://heykidscomics.fandom.com/wiki/Rawhide_Kid_Vol_1_5?oldid=1450716"
Community content is available under CC-BY-SA unless otherwise noted.