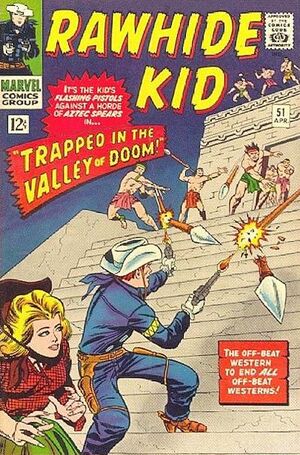 Appearing in "Trapped In the Valley of Doom"Edit

Synopsis for "Trapped In the Valley of Doom"Edit

Rawhide helps Anne rescue her father from temple of surviving Aztec's. Anne's guide collaborates with Xotoc, and masquerades as Quatzoma, using his gun to fool the Aztecs. Rawhide beats the guide with his own guns, and the Aztecs allow him, Anne, and her father to depart.

Retrieved from "https://heykidscomics.fandom.com/wiki/Rawhide_Kid_Vol_1_51?oldid=1450762"
Community content is available under CC-BY-SA unless otherwise noted.