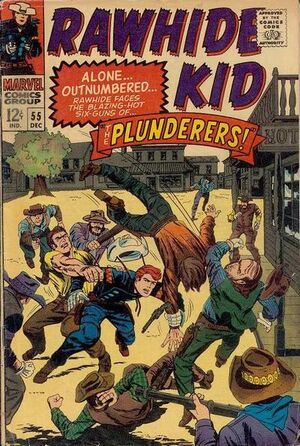 Synopsis for "With Gun in Hand"Edit

Cousins Joe and Les Cooper come into the employ of a rancher named Calhoun. Les claims to be the fastest draw in the west, but Joe refuses to carry a sidearm. Some time later, a gunsel named Natchez challenges Les Cooper to a draw. Both men fire simultaneously, and both men fall to the ground - seemingly dead. Les Cooper faked being shot however, and meets up with his cousin later down the road.

Retrieved from "https://heykidscomics.fandom.com/wiki/Rawhide_Kid_Vol_1_55?oldid=1450766"
Community content is available under CC-BY-SA unless otherwise noted.