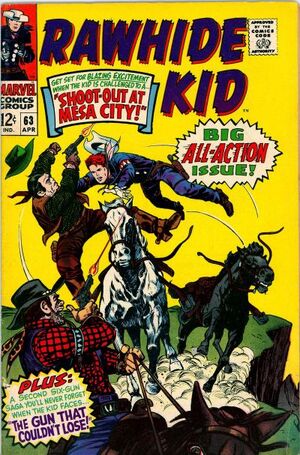 Appearing in "Shoot-Out at Mesa City!"Edit

Synopsis for "Shoot-Out at Mesa City!"Edit

The Kid is approached by Gila, who wants him to join his gang; the Kid refuses, but can't get the local sheriff to trust him; the Kid aids the sheriff anyway, and defeats Gila using judo.

Retrieved from "https://heykidscomics.fandom.com/wiki/Rawhide_Kid_Vol_1_63?oldid=1450774"
Community content is available under CC-BY-SA unless otherwise noted.