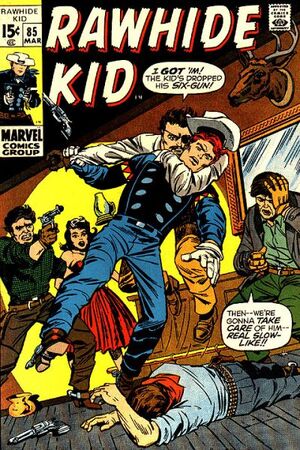 Appearing in "Ride the Savage Land"Edit

Synopsis for "Ride the Savage Land"Edit

The Kid rides shotgun on a stage, and is sent to escort Tom back to his father; Tom appears to be a coward when men steal from the stage, but in the end, he helps the Kid defeat them.

Retrieved from "https://heykidscomics.fandom.com/wiki/Rawhide_Kid_Vol_1_85?oldid=1450796"
Community content is available under CC-BY-SA unless otherwise noted.