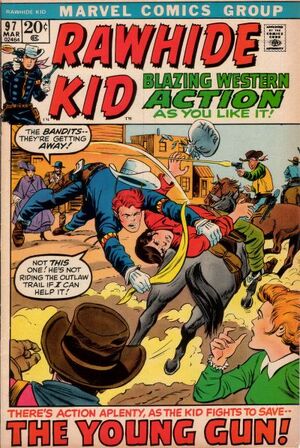 Appearing in "The Young Gun"Edit

Synopsis for "The Young Gun"Edit

The Kid helps reform Danny after capturing him by showing him that his brother is a weak man, through facing Clay in a showdown.

Retrieved from "https://heykidscomics.fandom.com/wiki/Rawhide_Kid_Vol_1_97?oldid=1450808"
Community content is available under CC-BY-SA unless otherwise noted.