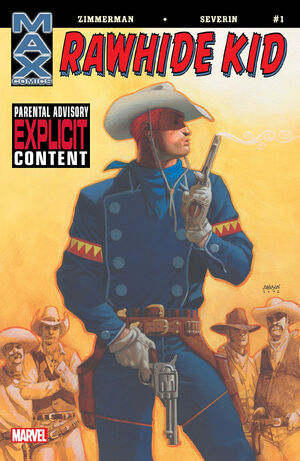 You kids are such gossips, aren't you? Okay, here's the rundown: I'm faster than Kid Colt, the Two-Gun Kid, Apache Kid and Kid Shaleen. Also faster than Wyatt Earp who is soooo overrated and rude it makes me crazy to talk about it... As far as the Lone Ranger, all I can say is, I don't care which one of us is faster, I just want to meet him. I think that the mask and the powder blue outfit are fantastic. I can certainly see why that Indian follows him around.

Rawhide Kid's sexuality is outed in this series.

Retrieved from "https://heykidscomics.fandom.com/wiki/Rawhide_Kid_Vol_3_1?oldid=1450867"
Community content is available under CC-BY-SA unless otherwise noted.