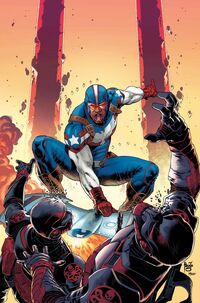 I'm surrounded by people who risk their lives for principles most people take for granted. There are times where I wish I could be one of those people.

Rayshaun "Shaun" Lucas was living in Brooklyn with his mother when Sam Wilson released footage showing that Rage had been wrongfully accused and savagely beaten by Keane Industries' private security personnel, the Americops.[2]

Following Elvin's unjust conviction, Shaun painted his face to resemble Rage's mask and then slipped out to firebomb a local bank,[3] before participating in the subsequent riots in New York City.[4]

After Sam Wilson resigned as Captain America, Shaun washed the Rage mask from his face and began to draw designs for a costume he called The Patriot.[5]

Some time later, once Steve Rogers had revealed himself to be Hydra and seized firm control of the United States of America thanks to the S.H.I.E.L.D. Act, Rick Jones was placed into protective custody, but guessed the pass-code for one of his guard's mobile devices and used it to hack into Hydra's network.

There he stole files belonging to Dr. Erik Selvig, which explained what Kobik had done to rewrite Captain America's history, and forwarded them to an internet user claiming to be part of the resistance, Patriot398, secretly Shaun Lucas.

Shaun then reached out to the real Underground online and met Viv who arranged to meet him in Las Vegas, where he was rescued from Hydra Dreadnoughts by her and the rest of the Champions before being taken to The Mount where he gave the files to the Tony Stark A.I..[1]

To thank Shaun for restoring his hope, Tony built him a shield based upon his designs for a new Patriot. He also programmed a Natasha Romanoff A.I. to help train him, and in relatively short order Shaun was already becoming a fine combatant as the all-new Patriot.[6]

Skilled Combatant: After his training with the Natasha Romanoff A.I., Shaun became a formidable combatant, both hand-to-hand and with a shield.[6]

Patriot's Shield: Shaun received his shield, a gift made by the Tony Stark A.I., that doubles as both a glider and a drone.

Retrieved from "https://heykidscomics.fandom.com/wiki/Rayshaun_Lucas_(Earth-616)?oldid=1652201"
Community content is available under CC-BY-SA unless otherwise noted.