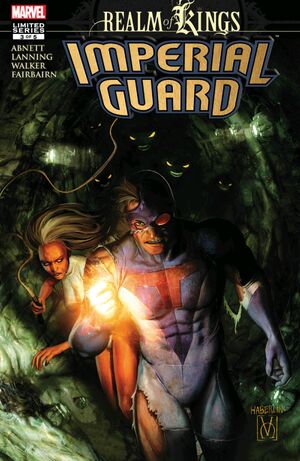 Can the Imperial Guard actually team up with their hated enemies the Starjammers? They will if they don’t want to be turned into worm bait by the giant decaying corpse they’re trapped in! What horrors has The Fault unleashed now, and is someone else from our universe winning the race to explore this dangerous new zone? Majestor Gladiator will not be pleased!

Retrieved from "https://heykidscomics.fandom.com/wiki/Realm_of_Kings:_Imperial_Guard_Vol_1_3?oldid=1732196"
Community content is available under CC-BY-SA unless otherwise noted.