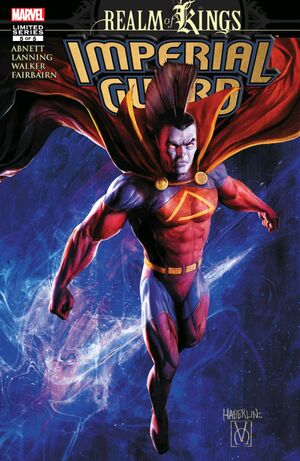 Deep in the unknown territories of The Fault, the Imperial Guard and their reluctant allies the Starjammers fight for their lives—and glimpse the true cosmic horror growing in the heart of this deadly new territory! Can they get out alive with a warning for the rest of the Marvel Universe? This sounds like a job for...Gladiator!

Retrieved from "https://heykidscomics.fandom.com/wiki/Realm_of_Kings:_Imperial_Guard_Vol_1_5?oldid=1771200"
Community content is available under CC-BY-SA unless otherwise noted.