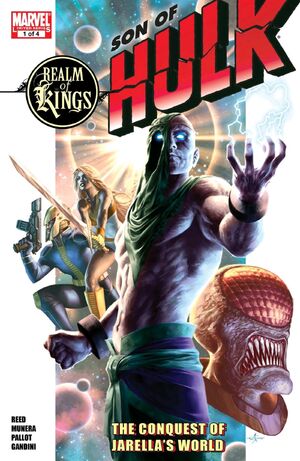 Meet a new monster for a new age, and a challenger to the warring Kings of the Cosmos...he is Hiro-Kala, SON OF HULK, and this young apocalyptic visionary has a destructive destiny: obliterate the Universe! This monsterous Son of Hulk has been abducted to Jarella’s sub-atomic world deep in the Microverse, where his father once found love and acceptance. Now he must battle an invasion force of murderous aliens…even if it means unlocking a new, horrifying power within him that can never be controlled. Book one of “THE CONQUEST OF JARELLA’S WORLD”, a mind-breaking adventure from critically acclaimed writer, Scott Reed.

Retrieved from "https://heykidscomics.fandom.com/wiki/Realm_of_Kings:_Son_of_Hulk_Vol_1_1?oldid=1450961"
Community content is available under CC-BY-SA unless otherwise noted.