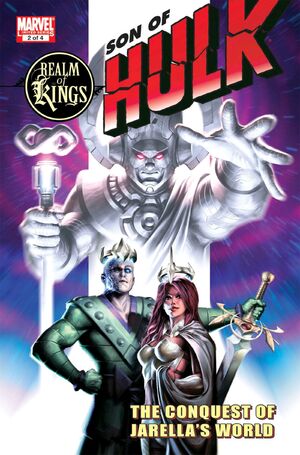 Hail Galactus, Herald to the Son of the Hulk?! As the SON OF HULK, Hiro-Kala, sets loose a chain of events that forever alters Jarella's World and threatens the entire sub-atomic Microverse, a vision reveals his future metamorphosis into a god-like being, with an enslaved Galactus at his control! As his dark destiny unfolds, Commander Rann and Princess Mari arrive on the planet K'ai, as Rann's obsessive quest to find an Enigma Force cure to his deadly radiation disease finally takes it's toll… but are they too late? BOOK II of “THE CONQUEST OF JARELLA’S WORLD”

Retrieved from "https://heykidscomics.fandom.com/wiki/Realm_of_Kings:_Son_of_Hulk_Vol_1_2?oldid=1450962"
Community content is available under CC-BY-SA unless otherwise noted.