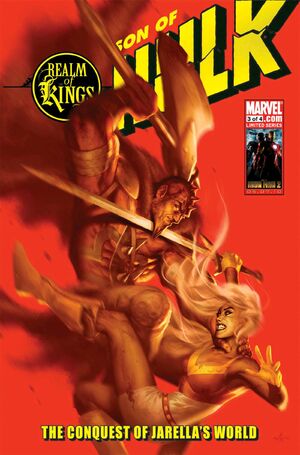 The SON OF HULK, Hiro-Kala, has become the greatest threat the Microverse has ever known. He’s only been there for one day. As the newly crowned ruler of his own world, the Son of Hulk unleashes vast, deadly secret weapons and seeks to destroy a mysterious, ancient artifact that holds the raw power of the Enigma Force! BOOK III of “THE CONQUEST OF JARELLA’S WORLD”.

Retrieved from "https://heykidscomics.fandom.com/wiki/Realm_of_Kings:_Son_of_Hulk_Vol_1_3?oldid=1450963"
Community content is available under CC-BY-SA unless otherwise noted.