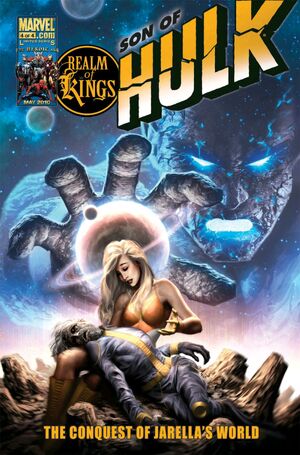 The SON OF HULK, the sinister visionary Hiro-Kala, learns that unlike his father, love, not anger, is his most dangerous emotion…for it is his love that will someday trigger an unstoppable, cosmic Armageddon! While this incredible prophecy forces him to make a shocking sacrifice, the Son of Hulk faces a brutal, final showdown that will shatter the past and future of Jarella’s sub-atomic planet K’ai…and the entire Microverse! THE CONCLUSION of “THE CONQUEST OF JARELLA’S WORLD”

Hiro-Kala next appears in Incredible Hulk #611

Retrieved from "https://heykidscomics.fandom.com/wiki/Realm_of_Kings:_Son_of_Hulk_Vol_1_4?oldid=1450964"
Community content is available under CC-BY-SA unless otherwise noted.