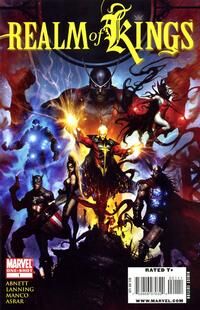 Appearing in "The Stars are Wrong"Edit

Exploding out of WAR OF KINGS, what lies in the REALM OF KINGS? The shocking showdown between Black Bolt and Vulcan has created The Fault, a vast tear through time and space through which almost anything can charge into our universe. What secrets does it hold? What dangers lurk within? Will it reintroduce forgotten allies…or unleash ancient enemies? The cosmic masters Dan Abnett & Andy Lanning unite with WAR MACHINE’S Leonardo Manco to open the next great chapter in Marvel’s resurging cosmic corner!

Retrieved from "https://heykidscomics.fandom.com/wiki/Realm_of_Kings_Vol_1_1?oldid=1732325"
Community content is available under CC-BY-SA unless otherwise noted.