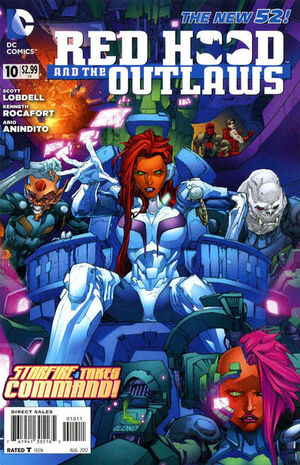 Synopsis for "Better to Burn Out - Than to Rage Away"Edit

Somewhere in Colorado, a member of the Untitled has used a member of its own in order to find an object called the Life Hammer. Having broken several convicts out of prison earlier that day for the purpose of this operation, he has them hold her back while he kills her.

As they make their escape, they are watched and pursued by Essence, the last daughter of the Untitled, who is sworn to destroy them. She kills the convicts, but the Untitled catches her by surprise. He warns that some of them have decided to take action since she and the Red Hood have apparently declared war on them.

Though this is not exactly true, the bold move by the Untitled pushes Essence to vow never to let them use the Life Hammer against humanity - if she survives this night, anyway.

Retrieved from "https://heykidscomics.fandom.com/wiki/Red_Hood_and_the_Outlaws_Vol_1_10?oldid=1661013"
Community content is available under CC-BY-SA unless otherwise noted.